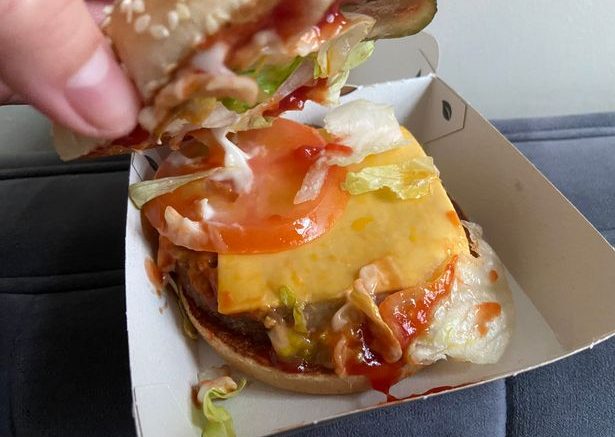 Veganuary means everyone starts bring vegan items to menus everywhere, which is always exciting even if it can be disappointing.

It’s always nice to see the effort being put in, but that doesn’t always pay off. As I saw yesterday with a burger I could’ve been more impressed with.

I’ve been hearing about the McPlant for months, with it being rolled out across a number of stores across the country but sadly none near me.

Well, today everything has changed.

Because the McPlant is officially out nationwide and you can get it easily delivered to your doorstep.

Which is exactly what I did this morning.

I didn’t waste any time placing my order, I wouldn’t have been surprised if I was the first of the day.

After being left disappointed by KFC’s burger I was quite nervous, but McDonald’s has managed to pull off their vegan burger really well.

It smells just like a typical McDonald’s burger, which I found to be quite a good thing.

But even getting past that, it tastes just like one too.

It’s got a tang coming in from the sauces, but the cheese alternative (while being a little thicker than what you will normally find on a cheeseburger) tastes just like cheese.

You may be thinking that that’s what it is supposed to taste like but a lot of vegan cheeses can be lacking to put it lightly.

The burger, made using Beyond Meat®, is really tasty and similar to a classic McDonald’s burger too.

And it’s cooked separately from other McDonald’s burgers and sandwiches using dedicated utensils – which means you shouldn’t have to worry about cross contamination.

I do always double check in store, just to be on the safe side, but as someone who doesn’t typically eat cheese I find it comforting that the two are kept separately.

Jada Jones is one of The Review Club’s expert reviewers

Jada Jones is one of The Review Club’s expert reviewers.

The Reviews Club brings together the UK’s biggest experts to review products and services in an honest and in-depth manner.

She specialises in books, food (excluding dairy – so she knows a lot of the best vegan alternatives), drinks and homeware.

You can find her over on @JadaJonesTweets where she is likely to be excitedly chirping about a book she read and is often up for a chat about any of her reviews.

McDonald’s have really knocked it out of the park with this one – it’s a victory for vegans and vegetarians everywhere (and I’d argue nicer than some of the meaty options).

But that’s just what I thought – do you agree and more to the point have you tried it?

Let us know in the comments or over on Twitter.

The top I’m wearing in the video is from ISAWITFIRST and you can buy it here.

All of my makeup worn in this video can also be found here, where you can see me put it on.

Things to do in Essex: 12 stunning outdoor walks and activities in Essex that are perfect for Boxing Day

Review: Legoland is an absolutely must visit this Halloween