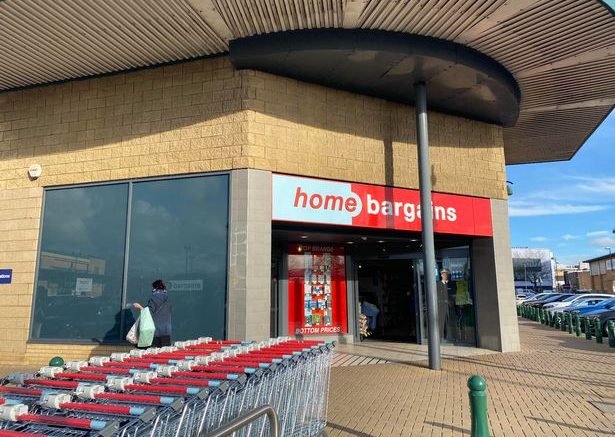 Now England has completed its first week of the second lockdown, I hoped the crowds in the shops might have died down.

But B&M, Home Bargains and Poundland stores are among the few essential shops that are still open.

They are classified as essential because they sell food, garden and personal care products, despite selling non-essential items too.

I set off for Basildon, Essex, as the town centre is home to all three of these stores. On a Thursday afternoon I was expecting it to be a ghost town, but I was very wrong.

I had to weave in and out of groups of people just to get to shops, making it quite difficult to socially distance. There were so many people it was hard to believe that we’re in the middle of a national lockdown.

All three of the stores I visited were adhering to the Government guidelines and had clearly put the necessary safety measures in place.

But there were lots of people out shopping and some of the stores were extremely busy.

In some cases, it was chaos.

Walking into the store, it wasn’t very easy to move without getting closer than two metres to at least one person.

The first thing I noticed was how busy it was.

So many people were trying to squeeze past each other, ignoring the encouragement of the social distancing stickers that were on the floor.

But everyone was wearing a mask, which is a positive sign.

I spotted a few people doing top-up shops to get branded products at a cheaper price, but most people were shopping in the Christmas section.

Full of Christmas decorations, toys and gift sets, it looked as though most customers were there to do their Christmas gift shop and not for ‘essential’ purposes.

There were no signs of panic buying on any items, even toilet paper.

I was expecting at least some gaps in the shelves, but it was full of stock and no one that I saw bought more than three of the same items.

The queues were short with plenty of staff on tills to ensure quick service and each till had a Perspex screen to protect shoppers and staff.

My next stop was B&M.

Similarly to Home Bargains, many people appeared to be in the store to buy festive products instead of essential items.

B&M had one-way systems in place as I entered, forcing me to go right to the end of the store and make my way through from there.

However, the directions didn’t last long and once you turned right you could go anywhere.

There were yellow lines on the floor, distanced two metres apart to ensure people could maintain a safe distance.

The isles in the middle are narrow so it was difficult to go in and out of each one without getting close to someone.

Everyone was wearing a face covering in store so not being able to distance wasn’t too much of a problem, and there was a good range of stock with no empty shelves.

There were queues in B&M because only three tills were open at the time, but it seemed to move quite quickly.

It was manic in Poundland.

There were so many people standing outside the store chatting it made it difficult to enter.

When I was finally able to get in, it was even worse inside.

When people were moving it was fine, but when people stopped to look at products it was nearly impossible to keep your distance.

But the store had implemented a one-way system.

When someone stopped to look at products, other people went a different way to get passed them in order to maintain a safe distance.

But there were so many people that you couldn’t avoid everyone and follow the arrows at the same time. When one person goes the wrong way, others follow suit, leading to chaos.

It was mostly busy down the Christmas decorations, skin and beauty and confectionery isles. I couldn’t get through the Christmas isle at one stage.

The queues here were the worst of the three stores. There was a fairly long queue for those waiting to pay and I couldn’t see how many members of staff were on the tills.

I dashed for the exit to get away from the crowds of people in store, but it was blocked by another group of people.

When I got back into my car I was relieved. I was back in my own space, not having to wear a face covering or trying to avoid getting too close to people.

I hope I won’t have to return to these stores during lockdown so I can avoid the crowds.

Understandably, people want festivities to cheer themselves up during this second lockdown, but I think I’ll stick to shopping online.

Perhaps if I went earlier or later it may have been quieter, but as these stores sell cheap and non-essential items, and as we get closer to Christmas, I fear it’s only going to get busier.

2 people rushed to hospital after a serious crash shuts A12