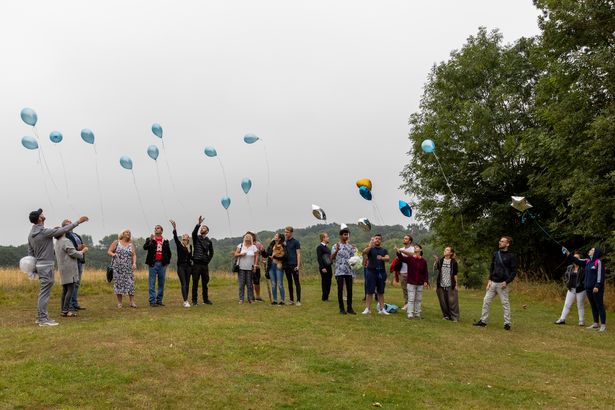 A local community came together last week to remember a young man who was found dead in a park earlier this month.

The 51-year-old’s youngest son, Alfie Creighton Atkinson, had died at the age of just 21.

Emergency services were called to Havering Park in Romford following reports that a man in his 20s had been found unresponsive.

He was found by a member of the public at around 5.40am and sadly, despite the best efforts of paramedics, he was pronounced dead at the scene.

The news of Alfie’s tragic death shocked the community, with many taking to social media to share their condolences in a Facebook group.

Just over a week after his death, Alfie’s family and friends gathered at Havering Park on August 14 to hold a vigil in his memory.

Despite thunderstorms and heavy rain being forecast in Essex, more than 50 people attended the event, which was orgainsed by Alfie’s brother George.

It took place inside the park at Alfie’s favourite tree, which was soon surrounded by beautiful flowers, candles and balloons all containing heartwarming hand-written messages.

The vigil started at 2pm and continued for several hours, with balloons released and fireworks set off around emotional speeches by Alfie’s family and friends.

The event was also attended by some of Alfie’s school friends, close and extended family and work colleagues – some staying until as late as 9pm to pay their respects.

“I didn’t eat for a couple of days, I just felt awful”

Alfie’s older brother George has been hit hard by the news of his brother’s passing.

The 28-year-old said: “Mum got a knock at the door at 9am and got told the news – I was in shock. I was devastated to hear Alfie had passed.

“I didn’t eat for a couple of days. I just felt awful, I still feel like I haven’t quite accepted it yet.”

The siblings, including brothers John, George and Alfie and their sister Alana, enjoyed spending time together over Havering Park.

“It’s our park now,” George continued. “It’s massive and we have so many memories here – whenever I am here I feel Alfie is here with me.

“He was a bit of a prankster and he did silly things to make everyone laugh. He was a well liked boy and very fun-loving.

“He thought too much of others and forgot about himself.

“I miss our banter, he did it to make everyone laugh.”

Loraine prepared a few words about her son to read aloud at the vigil on Friday.

The crowd fell silent and listened as she positioned herself under the tree alongside some of Alfie’s closest family members for support.

Loraine stood under Alfie’s favourite tree at Havering Park and delivered a few emotional words about her son.

Holding back the tears, she said: “Thank you everyone for coming for Alfie – I wish he knew how loved he was.

“He was my beautiful, caring, loving son we all miss you so much and want you back. Life without you is not the same.

“You looked after everyone and forgot yourself. You were too good for this horrible world and you always said you were the best looking out of you and your brothers and you were right, but you did need a haircut.

“I love you so much Alfie, please give me a sign.

“Alfie, when growing up I felt so bad as I think you missed out on having a father figure, but in the last five years, you finally had that when I met Chris who has always looked out as a dad.

“Thank you for everyone who came today in respect of my much-loved baby.”

After speaking at the vigil, the 51-year-old mum-of-four told EssexLive: “He didn’t have mental health problems, he just got a bit stressed and life got a bit too much.

“He was a much-loved, well respected boy.”

Loraine continued to describe Alfie as “one in a million” when paying tribute to her son following his death.

“Alfie, my gorgeous handsome boy, was always so kind and caring,” she added. “From being so young and small up until the time he died.

“He was so kind to everyone. He would help anyone no matter what – that was typical of Alfie and in the process, he forgot about himself.

“Alfie had such a big heart, a heart of gold, and now there is such a big gap in our lives and our world has collapsed.

“I will never see my son go on to become a dad and have children of his own.

“Alfie had a nephew called Lucas that he adored. He was an absolutely brilliant uncle.

“Alfie is missed so much by his two brothers John and George and his sister Alana myself and his step-dad.”

“My three sons did so much together, it was how they were raised to be, to stay close with each other, now seeing just the two of them without Alfie really hurts.

“Alfie would constantly check on his sister to make sure she is ok and would always be there for her and she is really suffering with this.

“Growing up, I felt Alfie missed out on a father figure, but in the last five years I met and married a wonderful man, my husband Chris, who became the dad Alfie always wanted.

“Alfie was always so fun-loving. He would also pick me up from work to save me from getting the bus. He was truly one in a million.

“He had an Auntie Sharon who he loved so much and enjoyed a Sunday meal round hers with his three cousins, Aaron, Liam and Maria.

“Alfie and Maria were very close and often stayed at each other’s houses as kids.

“Alfie would enjoy having long conversations with his step-dad Chris, who was always at hand to offer him advice and this was nice to see.

“We all love and miss you so much Alfie, our hearts are all so broken.”

“He was full of life – he loved life”

One person to attend the event to pay tribute to his friend was 21-year-old Joe Smith, who met Alfie in nursery and remained friends ever since.

“He was my best mate,” said Joe. “He was always so positive, he was full of life – he loved life.

“He never had a bad word to say about anyone and he had the best laugh.”

Just two weeks before Alfie died, he met up with Joe for a dog walk over Havering Park and “seemed fine”.

Another friend to pay tribute to Alfie was Max Smith, who attended Broadford Primary School in Romford with his friend.

The 24-year-old from Harold Hill added: “Alfie was best mates with my younger brother.

“Alfie was more of a brother to me. He was too good for this world.

“There is a hole in my heart and there always will be. I was really heartbroken when he passed away.”

He said: “A few of us had booked the day off work to spend the day together [on Friday] and we were going to come over here so it just seemed right to do something for Alfie.”

“I’ll miss his laugh, his smile, he was just a really good guy”

21-year-old Aaron Levine was in most classes with Alfie at Redden Court School in Cotswold Road, Harold Wood.

The school friends went on to attend Havering College together too.

Aaron said: “He was such a prankster and he got himself into a lot of trouble at school.

“I will never forget the day he shut me in a teacher’s boot for a joke during an engineering class. I was in there for most of the day.

“I’ll miss his laugh, his smile, he was just a really good guy.”

Reece Frost, who also went to secondary school with Alfie, remembers the mischief they used to get into together.

“We all had some good times with Alfie,” Reece added. “We used to sign each other’s planners and always got caught out.

“Once I broke the handle off a door and Alfie saw. A teacher came over and I said it was me but he said ‘no it was me’.

“We also set off stink bombs in the year 11 leavers assembly.

“He was always smiling and laughing”

23-year-old Harvey Perkin used to play video games with Alfie when he was a teenager.

Harvey recalled: “We used to play Call of Duty 24/7, all night every night.

“We were only about 13-years-old at the time and we did that for about two years. After that, we grew up a bit and didn’t play.

“One thing I will never forget about Alfie was how humble he was and how he was always smiling and laughing.”

For those who were unable to attend Friday’s vigil, there is a Facebook group called For The Love Of Alfie Creighton Atkinson that has been set up in Alfie’s memory.

The group has almost 300 members and is a place where those who knew Alfie can share their memories and photos and leave a message in tribute to him.

A GoFundMe page has also been set up to help raise money towards Alfie’s funeral costs. You can donate by clicking here.

Gemma Collins thanks doctors as her mum and dad battle coronavirus

The hidden truth behind Essex’s most notorious highwayman