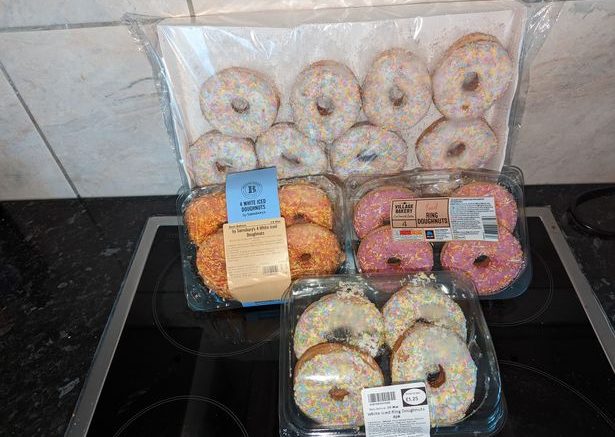 Doughnuts have had a major makeover over the decades. From the causal jam-filled treats we grew up with and love, to the over-the-top creations people are spending more time taking pictures for Instagram than eating today.

Krispy Kreme has been the go-to-brand for a good, soft, handmade dough because of how light it tastes and its melts in the mouth quality. But the hefty price tag means things from the American doughnut chain are more a special gift rather than an everyday snack.

That being said, people will be looking for cheaper alternatives to satisfy their sweet taste buds and start scouring supermarkets to find the perfect dough ring. Hence why I went to main retailers to help the cause.

Read More: I went to Costco to see if it really is cheaper than other supermarkets

Instead of getting the typical but popular jam doughnuts, I went a step up further and picked the iced doughnuts with sprinkles. Something more sugary and colourful and act as a great addition to a hot drink.

I picked Tesco, Asda, and Sainsbury’s as they are part of the ‘big four’ supermarkets in the UK. However, I replaced Morrisons with Aldi to see if the underdog retailer can outshine the mainstream hotspots.

But in the spirit of making things fair, the taste test will be blind and I will not see the product upfront. It means each doughnut has an equal 25 per cent chance of coming on top.

Getting the products was easy but I was hoping that the taste would match the price because doughnuts are not cheap these days. So which doughnut bite is worth the buy?

Out of the batch I bought, Asda was the most expensive because it only had a pack of 12 instead of the batch of four that the other supermarkets were selling. The pack of 12 cost £2.75.

There was a 5p difference between Tesco and Sainsbury’s, with Tesco pricing its pack of four at £1.25 while Sainsbury’s cost £1.20. Aldi was the cheapest as a pack of four costing 99p.

The first doughnut in the blind test was very hard to swallow. The doughnut did not dissolve in my mouth and had to chew several times to even get it small enough to swallow.

The good news was I could taste the icing. I hate iced doughnuts where you can’t taste the good stuff. But the problem I had with that is it tasted chalky – something no one wants to taste.

At this point, I was better off not having it at all. The chalky aftertaste of the icing was the cherry on top of how disastrous this was for me. But I was shocked to find out it was Sainsbury’s.

The supermarket is known for being prestige with their products and prices, so I was expecting this one to take the top spot. However, these iced doughnuts confirmed I would not be heading back there for a doughnut anytime soon.

This was my favourite one by far. Firstly, the doughnut was soft and melted in my mouth like butter.

Also, the icing was distinctive and I could taste the sugary but smooth creamy glaze that steamed down my tongue. This was by far premium in terms of taste quality.

However, the problem I had with this was very sticky on the top. I had no problem getting it off the plate but dealing with it on my hands was another situation. If you are going to eat this, make sure you are not wearing clothes that are prone to show markings and can be messed up with food.

When I found out that it was Aldi my mind was boggled. How can the cheapest doughnut be similar to, if not better, priemumn doughnuts?

When I held this one in my hands, it was really stiff and I was dreading the worst. And the taste proved my worst fears about this. I am not going to sugarcoat this one but this was the worst one out of the bunch.

This was stiff from the onset and throughout its testing, but also had a tacky taste to it. I’m not sure if it was from the icing or the yeast doughnut.

This came from Tesco I was a bit confused about it because they are known to sell amazing cookies and pastry. So in my head, I am thinking where is the disconnect because the iced doughnut was really below par for the price.

So there were some pros and serious cons to this. The great news was I could taste the icing and sprinkles and was it didn’t get stuck on my hands. This meant I could eat this in peace and not worry about the messy residue it could leave behind.

But the strong downside to this is the aftertaste. First of all, it is not soft and easy to chow down on. Second of all, it left a chalky aftertaste.

I don’t get it, how can I can experience the smooth icing but could not enjoy it with the blanched flavours of the overall doughnut. When I found out this was Asda I was disappointed considering it was a pack of 12.

And the best supermarket doughnut goes to…

Overall, I was shocked at the results of this blind test. But there was a clear winner.

Aldi’s doughnuts pulled an upset and managed to outperform all of the “Big Four” supermarkets. A bold opinion this may be but this doughnut could easily compete with the Krispy Kreme and other customised doughnuts.

The worst one however was definitely the one from Asda. Considering the price and quantity, I was expecting it to be melting like chocolate and taste premium. But it was dire the moment I held it in my hands. The big takeaway from this is that a cheaper option can sometimes be the better option.

To find the closest supermarket in your area, click here

New in Primark: The ‘gorgeous’ two-piece suit that shoppers are ‘obsessed’ with

Veganuary restaurants: The Vegan breakfast at Bill’s where the ‘eggs’ are far better than the real deal

Review: Legoland is an absolutely must visit this Halloween

Be the first to comment on "Tesco, Asda, Aldi, Sainsbury’s: I blind taste-tested supermarket doughnuts and one tasted just like Krispy Kreme"