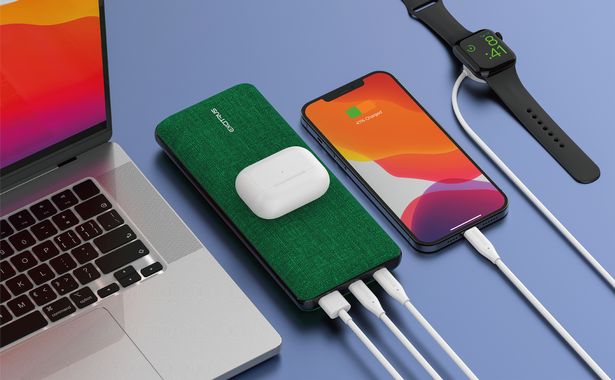 If you’re like me and you carry a lot of tech around with you, you’ll soon find yourself needing a power bank. And they’ve come a long way since the early days of bulky, slow, under-powered devices that could barely top up a modern smartwatch, let alone a laptop.

Representing just how far they’ve come, the Excitrus 100W magentic wireless power bank is the pinnacle of portable power supply, and it packs in so many features you’ll soon wonder what you did without it.

Truth be told, it’s not exactly small. It feels good in the hand, thanks to its fabric coating, but it’s fairly heavy and its functionality means it is quite a large device.

But chief among the features is a wireless charging pad, which boosts any compatible smartphone at up to 15 watts, and its soft surface area is the perfect size for even the chunkiest of handsets.

Not only that but, as its name suggests, this wireless charging surface is embedded with a strong magnet, which can keep compatible phones securely held while they’re being topped up.

And that’s a good thing, because the Excitrus power bank bundles in a whopping 20,800mAh battery. When you consider an iPhone 13 Pro has around 3,000mah, that gives an impression of just how powerful it is.

So charging power-hungry devices is no problem at all. Even charging smartphones several times over won’t see it break a sweat.

It gets better than that, though. Modern smartphones are capable of guzzling charge at up to around 60 watts, so the Excitrus has more than enough oomph to cater for this – and then some. One of its USB outputs can hurl out a remarkable 100 watts. It’ll even accept charge at up to 60 watts.

All this means it’s not only more powerful than you strictly need it to be, it’s also future-proof.

It says a lot for a device when the technology it caters for will need to catch up, but that’s definitely the case here.

It even has a small digital display on one side, which gives a clear reading in percentage terms. No arbitrary bar graphs here, thankfully.

Downsides? Nope, I’m struggling to find any. Some may balk at the current £78 price but I’d ask them to offer up anything quite so capable for similar money.

Sure, you can get 20,000-plus mah battery packs for half the price, but try and find one that offers so many features in such an attractive package. It’s a five-star device by any measure.

ADVERTORIAL: Experience the magic of Christmas and Halloween all under one roof at Scott’s of Southend