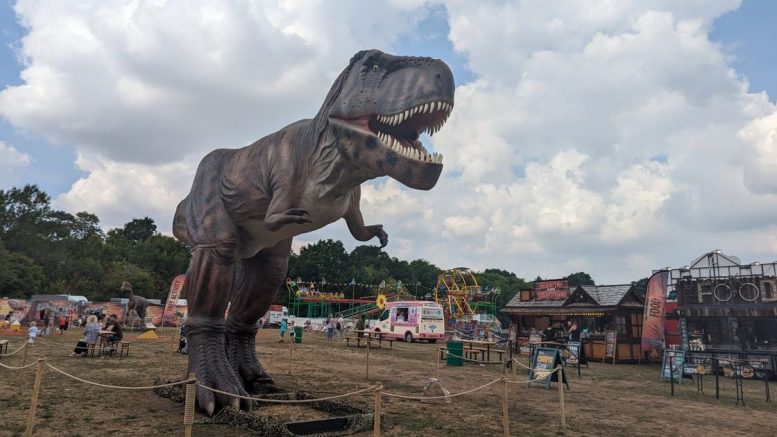 More than 35 lifesized animatronic dinosaurs have taken over Hylands Park in Chelmsford. The dinosaurs are part of the touring ‘Dinosaurs in the Park’ event that is here in Essex for the rest of the school holidays.

Opening last Thursday (August 18), Dinosaurs in the Park has brought a selection of realistic dinosaurs to the centre of the county park. It starts off with a trail around the woods where you can see and learn about a huge variety of dinosaurs.

You can find Stegosaurus, Triceratops, Brachiosaurus and more all of which move and make noises. All of the dinosaurs also have information boards where you can find out information about them such as when they were alive, what they ate, how big they were and what they were like.

Read more: I took £10 to an Essex pier’s arcades and almost left with nothing

I got to go down to the event to see what it was really like and I can honestly say that the dinosaurs are super realistic. All of the children I saw believed the dinosaurs were real and couldn’t believe how close they could get to them.

The dinosaur trail is very well spread out with plenty of room for everyone to see them without it getting crowded. There has also clearly been a lot of thought put into the order of the dinosaurs on the trail with the ‘scary ones’ spread out across the route.

This meant that it was easy to quickly move on from any that nervous children may be scared of and go and see the herbivores instead. Saying that the way it is set up also means that you approach the dinosaurs rather than them walking up to you.

Every dinosaur is in an ‘enclosure’ so they can’t be touched but you can get close enough to get some great photos. At the end of the trail, you find the giant T-Rex and lots more.

Here, there are opportunities to get even closer to the dinosaurs, stroke some and even help burst a t-rex’s teeth with the Dinosaur Dentist. There’s also a sand pit where you can dig for fossils, a mini gold course and a bouncy castle that all come included in the ticket price.

For an additional charge, there’s a small funfair with rides, games and a miniature soft play. There’s plenty on offer when it comes to food with burgers, hot dogs, waffles, ice creams and a stand dedicated to vegetarian food.

Dinosaurs in the Park is in Hylands Park until September 4. You can pre-book tickets here and prices depend on when you go.

Take a look at our photos below to see inside Dinosaurs in the Park:

In Your Area: What’s on widget

ADVERTORIAL: Experience the magic of Christmas and Halloween all under one roof at Scott’s of Southend