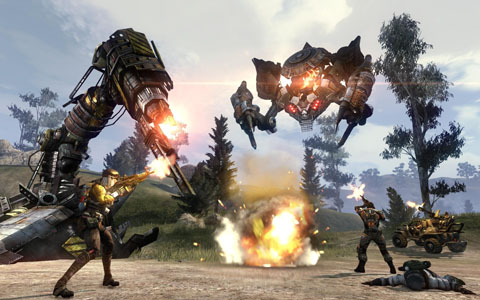 Never before has a game tried to be as brave as Defiance. I mean, releasing a game must be stressful enough. But to then have an ongoing live action television series based on the main characters of the game, running alongside it, must see those developers sweat in their seats. The game is designed to follow main parts of the television series. Having the game released before the show itself gave developers enough time to introduce those important characters and get you familiar to the setting of the game world. Defiance is an MMO, and a bit of a bog standard one. Its quests rarely develop extreme excitement, unless you are new to this sort of thing. Missions are a bit like collect three of these, or 10 of those. It’s not new, but the storyline offers quite an exciting story line which will keep you hooked. It begins with a giant battle cruiser spaceship, the Strattocarrier EMS New Freedom heading towards what we used to know as Earth. Terrible alien conflict has caused Earth to become a barren wasteland with few survivors. Think Mad Max style setting with huge alien bugs. Starship Troopers without the grime? You play as an ‘Ark Hunter’. An Indiana Jones-esque character hired to find advanced and extremely valuable Arktech. The levelling system within the MMO is generally a new idea. You have an EGO rating. This goes up with the XP you collect and can reach into the 1000s, rather than your standard level cap of 50 or 60 as we have seen so many times before. Your EGO rating gives you the ability to unlock your perks, and also to use more powerful weapons to face your enemies. The number of weapons available can mix the various styles of game play you can choose. Guns are fully customisable, giving you the opportunity to add stocks, scopes, larger ammo clips, launchers, and many more. Defiance is hugely free form meaning where ever you go, you won’t get out ranked very quickly giving you the chance to play with friends and clan members which are at a higher EGO rating than you, and not feel at a large disadvantage. As long as Defiance can keep up with its television series, and keep fresh and new ideas in a constant stream, there is no reason why this MMO cannot lead a successful lifetime.

The news should excite Wagamama lovers Essex Live – What’s On …

A weekend with friends drinking, laughing and putting the world to rights Essex Live – What’s On …