Just a little like Grand Theft Auto you get to clean up a city that is plagued with bag guys, and you have a dog for company.

This isn’t Liberty City though – this is Grant City. Yeah, that makes all the difference.

You run about like Lara Croft, jump, duck, hide, sneak, and blast all the retribution you can muster. And there’s a dog too. He bites people. No fricking laser beams on his head, but then he’s not a shark either.

You are Jack Slate. Another of those semi-tough game names – love it. Better than Jim Granite I would guess.

And you run about taking out the million of baddies that swarm every level. You will get shot, you will get punched, but as you are the hero, you will win. Even if it’s only your head sticking out of cover, and you get showered in your own blood, it seems Mr Slate is one tough dude. And he has a dog.

He, and the pooch, are up against a militia that is keen to take over the whole place, so a typical story of one man and his dog taking on a world of pain and hurt, just so you can get to Primark safely.

It’s not a bad game – fast action, it flows well, and the story unfolds at a nice pace.

Well worth the dosh I would say. I prefer first person shooters, but this is ok. 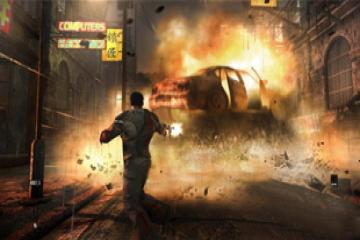